Why you can ignore what’s on the label 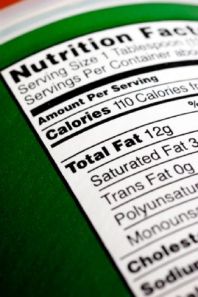 As cancer survivors, we try to maximise our chances of living the rest of our lives healthily and minimise the chances of facing a cancer reoccurence. We study food labels in an effort to make wise food choices, but  often these lables can be misleading.

Nutrionist, Jane Clarke has this to say in her final “Good Health” column for the Daily Mail.

“Over the past few years, there’s been a real boom in ‘functional foods’. These are foods that don’t just fill you up, but have ingredients – often added in the manufacturing process – with particular health benefits; or so it’s claimed.

For years, breakfast cereals have been fortified with minerals and vitamins to boost their appeal, but now everything from baked beans to simple foods such as eggs comes adulterated.  The suggestion is that the product has something extraspecial that’s worth paying for. But there is growing scepticism about this wonderfood status.

Indeed, only last month, a Which? report said that it was ‘hard to see the point’ of products enriched with omega-3 (the manufacturers’ favourite additive).  This fatty acid, found in oily fish such as salmon and mackerel is a great way to protect your heart and possibly aid concentration. But putting omega-3 in baked beans, say, doesn’t mean you’re going to get as much as you would by eating fish. Just one portion of oily fish a week gives you all you need of omega-3.

To glean the recommended 450mg a day, Which? found you’d need to eat six tins of omega-3 Heinz baked beans, 24 slices of enriched Kingsmill bread, or three Goldenlay eggs. (Yes, that’s 21 omega-3 eggs a week; the Columbus omega-3 egg is even lower in the added fatty acid, meaning you would have to eat 31 a week!)

Eating this amount would probably make you pile on weight – it would also leave little room for fresh fruit and vegetables so you’d be missing out on essential nutrients such as fibre and vitamin C.

And, if you fry the eggs to make big sandwiches with lashings of butter, this completely negates the heart-boosting benefits of the omega-3. But perhaps one benefit of the credit crunch is that sales of these omega-3 enriched foods seem to be falling as people watch their spending, according to this month’s New Nutrition Business.

Unfortunately, the fact is that people also aren’t interested in doing anything dietwise if they won’t see the benefits for a few years.  Most people want instant results – and most functional foods won’t deliver these. “