Do you really wish you had breast cancer? 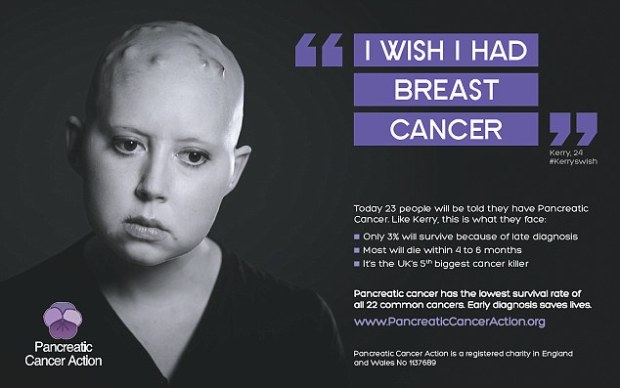 After the intense debate on Kellergate, I didn’t feel ready for another cancer controversy on the blog so soon again. However, after sitting with this campaign for 24 hours, I just had to say something. I mean seriously? Is this anyway to highlight the inequity you perceive in awareness and funding for pancreatic cancer?

The ‘envy’ campaign was devised by the charity Pancreatic Cancer Action to highlight the poor survival rates of the disease, by showing patients wishing they had more common types of the disease such as breast and testicular. The crux of the message is that the disease has a five-year survival rate of just three per cent – compared to 85 per cent of breast cancer patients and 97 per cent of men with testicular cancer but as the Metastatic Breast Cancer pointed out in response to this “Survival stats meaningless if you’re the one who dies. A death is a death.”

I am not for one moment saying that the charity does not have a valid point to make about funding and survival rates, but doing so by way of creating division and turning cancer into some kind of horrible reality show competition, is not the way to go about it.

The charity’s founder, Ali Stunt – diagnosed with pancreatic cancer in 2007  – defended the campaign by saying:  “When I was diagnosed I was horrified to learn the survival rate and actually found myself wishing I had a different type of cancer. ”  Yes, but how about wishing that she didn’t have any kind of cancer at all – surely a better wish?

Chris Askew, Chief Executive of Breakthrough Breast Cancer, said:  ‘We strongly dispute any message which suggests that one type of cancer is preferable to another. We believe Pancreatic Cancer Action’s recent campaign does just this. I’ve yet to meet a man or woman with breast cancer who would consider themselves in any way fortunate to have received a diagnosis. ‘It’s utterly misleading to imply that breast cancer is a more desirable form of the disease.

If I put aside my ahem, “pink” hat for a moment, and put on my PR/marketing hat, and I stand back objectively, I think I can see what the charity were trying to do with this campaign. They wanted to shock viewers into understanding their message, and in this they have succeeded – but for the wrong reasons. It’s a PR disaster in my opinion. It has only succeeded in creating divisiveness in the cancer community and I am not sure how it will succeed in increased funding? While I find the ad crass and insensitive, I do have sympathy with the fundamental message behind the shock tactics, even if I disagree with them on the way they have gone about it.

One final thought. There is a phrase in the Bible about looking to the plank in your own eye, before taking the splinter out of your neighbor’s – and perhaps this is also a time to examine the resentments, divisions and hierarchy in our own breast cancer communities. I wrote about this last year and asked the question about whether the experience of cancer is scalable. A diagnosis of cancer is a traumatic event in anyone’s life and I don’t believe we can compare the level of trauma. Cancer is cancer, is cancer, and how you process that, regardless of the treatment you did/didn’t receive, can only be truly assessed according to your individual experience. I concluded that post with a reminder that seems appropriate to share again.

Be kind, for everyone you meet is fighting a hard battle. Plato

← Facebook Memories: What Are Your Best Moments?
Weekly Round Up: The “I wish I had breast cancer” Edition →

22 thoughts on “Do you really wish you had breast cancer?”