When one person’s trash is another’s treasure 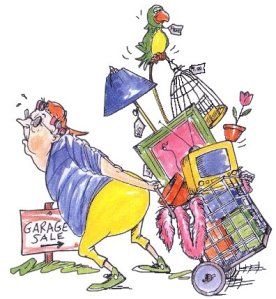 “One Person’s Trash” is a wonderful series of personal essays which appeared in Open Salon on the theme of spring cleaning…but with a twist. The stories reflect on objects that people can’t bring themselves to throw away.

I was particularly moved by hospice nurse, Molly Tennyson’s essay “What he gave me before he died”. Her story concerns John, who in dying, taught Tennyson a lesson on living.

At one point in the story, she is reminding John of all the reasons he still has to hold onto life.

I reminded him that he loved working in his garden, and when all else is gone, there is still that warm bit of sunshine, and joy can be found there. There is ice cream! There is music! There is so much to live for, I argued. To die now would be to say that all life is meaningless, because what do any of us have other than moments, small delights, ice cream and bright bits of sunshine.

John gives her a gift of some sharks’ teeth which he has collected on his lifetime of travelling and these become the object the author cannot bring herself to throw away.

Sometimes I think about putting them in a designated spot or in a little jewelry box or something, but I never do. I like them this way. I found one of the shark teeth on top of the microwave this morning. The kids pick one up occasionally and marvel at how sharp it is before throwing it down and moving on to something else. Whenever I find one, it’s a happy surprise for me. I am reminded of dying with John. I am reminded of the importance of living authentically, speaking authentically, dying authentically, and trying always to be grateful for each precious moment, every scoop of ice cream, and the sunshine.

In another essay “The wig I hope I never wear again”, Laurie Turner writes about how she holds onto the wig she wore when she had breast cancer as a reminder of how far she has come.

She had worn it frequently after her mastectomy noting how soft it was; she wore it after chemo when her skin had felt itchy and flushed. After she died, it became my father’s official suit of mourning.

When Kenet was diagnosed with breast cancer herself she ” took the sweat shirt down and considered trying it on — just to see how it felt after the surgery.”

I placed it against my chest, regarded myself in the mirror. It wasn’t just a reminder of Mom; it was a vestige of a time past when women like my mother weren’t even offered the option of reconstruction. I put the sweat shirt back in the drawer. Me, I am happy in my snug jog bra and a V-neck T-shirt, grateful I had only a small incision and a guarantee of long-term survival. But, if I ever need the shirt, I’ll know where to find it.

This is just a flavor of this series of deeply personal and moving stories and it prompts me to ask the question what is it that you cannot bear to part with? Is there an object which, though it may not look like much to others, is more precious to you than any jewel?

← Weekly Round Up
Meat Free Monday →