The measure of a man

Pete in his final film role in Killing Bono

The actor Pete Postlethwaite is someone I have always admired, particularly  for his Oscar nominated role in the Guildford Four film, In The Name Of The Father, and I was saddened to hear of his death from cancer in January this year.

I have just finished reading his memoir A Spectacle Of Dust, and was very moved by the chapters he wrote in the final weeks before his death. I would like to share a few extracts with you today.

‘I’m sorry to tell you that you have cancer,’ said the doctor.

A large, malignant tumour was growing on one of my kidneys, and urgent intervention was required. Nothing prepares you for that diagnosis. I sat there, impassive, watching the doctor’s lips move and hearing the words, but failing to compute the meaning.

Soon, however, my initial shock was replaced by wave after wave of optimism. ‘I’ll beat this bloody thing,’ I told myself. ‘I’m not going to let this stop me.’

It helped that I’d suffered from cancer 18 years before, when I’d had a testicle removed and recovered without much fuss. I’d even gone on to father a daughter afterwards. If I’d beaten it once, I could do so again — even though I was now 63.

The hospital booked me in for an operation to remove the kidney, and the doctors were reassuring in the weeks that followed. As far as I was concerned, I was cured.

I refused to allow a negative thought to enter my mind, preferring to keep focused on my family and the future.

To the wider world, I said nothing. First, you can’t start filming and then die in the middle of the movie, so an actor with cancer is uninsurable. And if you’re uninsurable, your career is over. But beyond that, I didn’t see why my cancer should become public property. I’d certainly never considered myself a celebrity.

(Pete’s last film role was as a gangster in Killing Bono, based on a book about being in a band that faltered in the shadow of U2)

There was a hush on set when I delivered a speech written specially for my final scene. It went straight to the heart of who I was and what I was about.

‘A word to the wise from an old man before you go. Remember only this: the measure of a man is what’s left when fame falls away.’

I’d been fighting hard, following doctors’ orders, keeping off the Guinness and following my dietitian’s advice. In many ways, I’d been the perfect patient, doing everything by the book and remaining highly motivated — but the cancer had somehow remained abstract.

(Pete’s treatment was no longer working)

Now, everything had changed. I suddenly became acutely aware of my own mortality.

The things that had seemed important before no longer were; the things that I’d worried about melted away. What really mattered was my love for my family, my friendships with other actors and my beliefs. My gratitude for the smallest kindness was amplified, as was my appreciation of nature and other people.

In short, I was profoundly grateful for the life that I still had.

During the afternoons, I sat on the terrace, observing the insects and birdlife that filled the skies. When days went well, it felt as though the heavens were opening and angelic choirs were singing.

I was humbled by the life I’d led and joyous about the fleeting, ephemeral moments that I’d once taken for granted. Instead of feeling jaded and ground down by my illness, I focused on the beauty of my world.

When auspicious news came from the hospital, I received it with the joy of a child on Christmas morning. When the news was more downbeat, I received it stoically.

Funny that I should no longer be acting, yet my life is as busy as it ever was. So many friends are coming to see me that it’s like being backstage on the last night of a successful play.

Morphine dulls the pain in my stomach, though sometimes it is like a hot knife. But there’s still time to revel in reminiscence as I revisit corners of my life.

It’s time to stop writing now. There’s a Christmas tree for Will to fetch, visitors to welcome and one last good time to be had.

My decline is insuperable, and I accept it with peace and equanimity. I know my family will miss me, and I will miss them. And that, in the end, is all that matters. 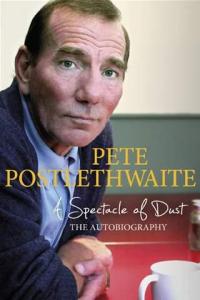 Category : Books on Cancer
Tags : A Spectacle Of Dust, Guildford Four, Guildford Four film, In The Name Of The Father, Killing Bono, Pete Postlethwaite, U2

← On missing my mother
Weekly Round Up →

18 thoughts on “The measure of a man”