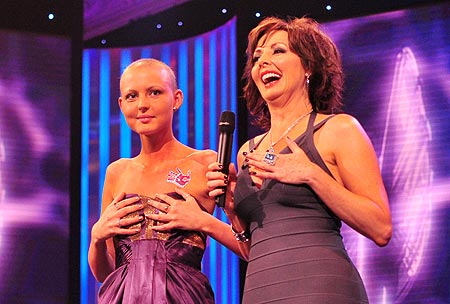 Kristin Hallenga, received a Pride of Britain award this week for launching a breast cancer awareness campaign, Coppa Feel, while undergoing treatment for the disease. After receiving her award, the 23-year-old said: “That was just wow! I’m still buzzing. It was amazing to see so many celebrities, but even more incredible to see them all crying, because of something little me has done.”

“But most of all having this has given me the spirit to continue the fight and beat my breast cancer. It has been a tough year and I’m still taking one day at a time, but this award will help me stay positive even through the difficult times.”

I first saw Kristin back in July on Dawn Porter’s  Sky One documentary on breast cancer, and was struck by how young and how beautiful she was. She really made an impression on me. Her story is a sadly familiar one to those of us, whose concerns over finding a lump were dismissed by our own GPs., who subscribed to the myth that we were too young to get breast cancer. Kristin visited her doctors in June 2008 concerned about ‘lumpy breasts’. Doctors told her it was nothing to worry about and suggested that evening primrose oil might be helpful. Kristin went to China for six months, travelling and working. On her return Kristin went back to her doctors as she was still concerned, again she was told that there was nothing to worry about. Kristin’s mum made her go back again and eventually after tests she was diagnosed with breast cancer.  A week later, a scan revealed that the cancer had also spread to her spine. Kristin had intensive radiotherapy on her spine, which eased the pain, and is now undergoing chemotherapy to shrink the tumour.

Congratulations Kristin. You are a deserving winner of this award and a true inspiration to us all.