Darren Clake wins the British Open on his 20th attempt

Northern Irish golfer Darren Clarke fought back tears as he paid an emotional tribute to the wife he lost to breast cancer five years ago.

“In terms of what’s going through my heart, there’s obviously somebody who is watching down from up above there, and I know she’d be very proud of me,” said the golfer from Dungannon, Co Tryone, of his wife Heather. 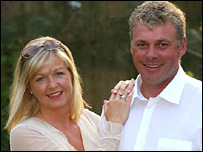 One of the first players to congratulate Clarke on his win was golfer Phil Mickelson, whose own wife Amy is in remission from breast cancer.

‘Darren was one of the first people who called us when Amy was diagnosed,’ said Mickelson. ‘He couldn’t have been a better person to talk to.We talked for a few hours a couple of times and he told us what to expect and what they went through — their fears and so forth.”

Heather Clarke had been diagnosed with primary breast cancer in December 2001, then, in 2004, with secondary breast cancer. Throughout her illness, she had insisted her husband continue playing championship golf, but he decided to stop in 2005 and 2006 so he could be with her and their two young children, Tyrone and Conor. Heather died on Sunday 13 August 2006 at 39 years of age, in the Royal Marsden Hospital, London.