Today, 1st February is St Brigid’s Day in Ireland. If St Patrick is our national saint, then Brigid is Ireland’s patroness. Girls were traditionally named Mary or Brigid in days gone by in Ireland and as my own mother was called Brigid, I always felt an affinity to her story.

As a child, I always loved the ancient story of St. Brigid, who I viewed as a beautiful Celtic goddess.  Her father, Dubhthach, was a pagan chieftain of Leinster and her mother, Broicsech, was a Christian. It was thought that Brigid’s mother was born in Portugal but was kidnapped by Irish pirates and brought to Ireland to work as a slave, just like St. Patrick was. Brigid’s father named her after one of the most powerful goddesses of the pagan religion – the goddess of fire, whose manifestations were song, craftsmanship, and poetry, which the Irish considered the flame of knowledge. 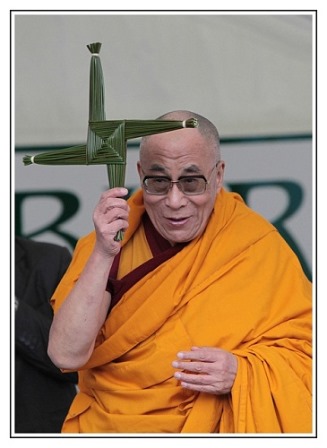 His Holiness the Dalai Lama being presented with a St. Brigid Cross on visit to Kildare, Ireland in 2011.

Back in my school days we made the traditional  St Brigid’s crosses in class and I would take mine home from school to present to my own Brigid, my Mum.  The story behind St Brigid’s cross is that during one of her travels, St Brigid went to visit a dying pagan chief. As she sat near his bed, she picked up some rushes on the floor and began weaving a cross. When he asked her what she was doing, she told him about the meaning of the cross and this led to his conversion to Christianity.

Making a St. Brigid’s cross is one of the traditional rituals in Ireland to celebrate the beginning of early spring. The crosses are made of rushes that are pulled rather than cut. They are hung by the door and in the rafters to protect the house from fire and evil. According to tradition a new cross is made each St Brigid’s Day, and the old one is burned to keep fire from the house.

Today is also Imbolc, the Celtic fire festival which celebrates the beginning of the end of winter – it’s not yet spring but the first stirrings of new life are happening and light is returning. This a good time to think out new ideas, ready to come into being.